The Importance of Cliché Sayings in AA

The Importance of Cliché Sayings in AA

The disease of addiction affects people in profound ways, resulting in what’s essentially a total transformation. There are physical effects, mental effects, emotional effects, behavioral and social effects, even spiritual effects. Fortunately, there are many resources available to help people overcome the effects of addiction.

Today, many people feel that addiction treatment programs are the most effective form of treatment, giving individuals the highest chance of achieving long-lasting sobriety; however, there have been many people to have experienced much success by utilizing resources outside of the clinical, medicinal rehabilitation programs that are available. In particular, twelve-step programs like Alcoholics Anonymous and Narcotics Anonymous have been extremely successful since they were created in 1935, which was soon a national- and global-level support program.

Anyone who has attended twelve-step group meetings will have heard many of the expressions, adages, and sayings that are popular in the group. Many of these aa sayings sound cliché and banal, but there are typically some very important, useful messages underneath those sayings. Therefore, the following are some of the most common—and, incidentally, some of the most helpful—clichés of Alcoholics Anonymous.

During the recovery process, it’s not uncommon for people to look back fondly on their time spent in active addiction. Despite the many things they did having dire repercussions, they will often look back on all the fun they had, which is incredibly dangerous. Glorifying one’s past substance abuse is the first step toward a relapse. Therefore, it’s important for recovering addicts to maintain perspective, reminding themselves of all the negative experiences they had during their addictions and assuring themselves that the worst day they could have while sober is better, safer, and less uncertain than the best day they could have while under the influence.

“Have An Attitude Of Gratitude”

There are a number of Alcoholics Anonymous sayings that rhyme. Rhyming is intended to make the sayings easier to remember and to give them the potential to used as one’s mantra of sorts. And with this one, the focus is entirely on being grateful. One of the major tenets of the twelve-step method is gratitude; a person should be grateful for having the opportunity to get clean, for his or her support network, for the actual twelve-step method, and so on.

“Pain Is The Touchstone Of Spiritual Growth”

Being in the throes of active addiction is hard, but recovery isn’t easy either. When a person who has been abusing mind-altering substances for an extended period of time—months, years, or even decades—gets sober, a flood of emotions that he or she hasn’t felt in a long time, and it can cause an immense amount of emotional pain. As part of the twelve-step method, recovering addicts take an inventory of their character defects, take an inventory of the wrongs they’ve committed against others, and then try to make amends for those wrongdoings. Again, it’s an incredibly emotional time, and there’s the potential for a lot of pain to be involved. However, be aware that on the other side of the pain, there’s growth. 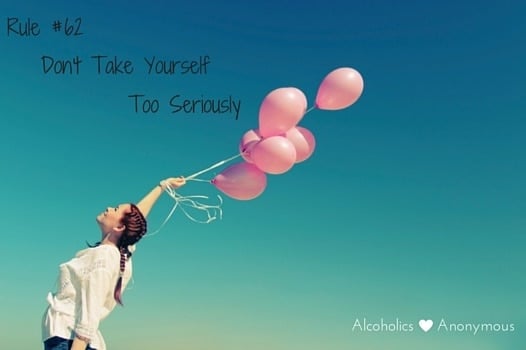 Many people have misconceptions about addiction. For instance, people often assume that anyone who’s an addict is a criminal, has HIV or some other bloodborne disease, and are homeless, but those stereotypes aren’t true of all addicts or even the majority. Another mistaken belief is that a person who’s an alcoholic has to drink pretty much every day to be an alcohol; however, that’s another major misconception. In reality, a person can be an alcoholic while only drinking every so often. The best way to think about the criteria for alcoholism and drug addiction is when a person who drinks alcohol or consumes drugs cannot predict the outcome of that consumption. This allows for the distinction between “a lot” and “too much”; a person may not drink a lot compared to most other people, but it could still be too much for him or her specifically.

“Serenity Is Not The Absence Of Conflict, But The Ability To Cope With It”

This line sounds like a bit far-fetched, but it begins to make sense when you really think about it. We think about serenity as being a state of calm, which is true, but to achieve a really significant state of serenity, you need to be able to hone that serenity even during times when it might be difficult. When you consider this line that way, it’s actually quite clever. There’s a lot of merit to the idea that achieving serenity is about more than living free from conflict; it’s also about being able to cope with conflict in a calm, serene way.

“I Came For My Drinking And Stayed For My Thinking”

Addiction is an all-consuming disease that affects virtually every single aspect of a person’s life: physical health, mental and emotional well-being, relationships, career, financial independence, and so on. Therefore, being in the throes of active addiction means more than a chemical dependence. It also means that the brain has been profoundly altered, both functionally and structurally. This line refers to how many people seek help from twelve-step groups so that they can get sober, but they often realize that the twelve-step method is not just about sobriety, it’s also about adopting a new outlook on life.

There’s no right or wrong way to overcome an addiction. Additionally, not every recovery resource yields optimal results for all addicts, which is why it’s important that each addict receives help selecting the forms of treatment that best address his or her unique needs. If you or someone you love would benefit from discussing the many treatment options that are available, call Guardian Intensive Outpatient toll-free at 855-517-1871. Don’t want another day to begin the journey to long-lasting health, mental and emotional wellness, and happiness.