Prescription Drug Take Back Day in Florida and New Jersey

Prescription Drug Take Back Day in Florida and New Jersey

In recent years, what is now widely known as a nationwide opioid epidemic has devastated the lives of millions of Americans. The Centers for Disease Control and Prevention reported that the number of overdose-related deaths that directly involved an opioid narcotic quadrupled from the year 1999 to the year 2018. Nearly 450,000 people lost their lives to opioid overdose during this time frame. The CDC suggests that there have been three main waves of opioid-related overdose deaths since 1999. The first wave can be attributed to the over-prescription of narcotic opioid painkillers like morphine, codeine, oxycodone and hydrocodone. The second wave began in 2010 – as government officials began cracking down on painkiller distribution, many individuals who had already developed a substance abuse disorder transitioned from painkillers to heroin. Heroin overdose deaths spiked at around this time. The third wave occurred in 2013, when drug dealers began mixing heroin with fentanyl – an extremely potent synthetic opioid painkiller. Since then the rates of overdose-related death have continued to climb on an annual basis.

Prescription opioids remain responsible for a significant amount of overdose-related deaths nationwide. The National Institute on Drug Abuse reported that there are three predominant types of prescription medication that are commonly abused.

While prescription drug abuse and addiction have gravely affected the entire country, states like Florida and New Jersey have been especially hard hit. Fortunately, Guardian IOP offers an unmatched level of clinical care to men and women of all ages in Florida, New Jersey and all surrounding areas.

The Florida Health Annual Report for 2018 to 2019 includes a wide range of statistics concerning prescription drug abuse and addiction throughout the state. The report concluded that between the years 2018 and 2019, increased prescription and distribution regulations throughout the state of Florida had a noticeable impact on the statewide opioid epidemic. Because opioid narcotic medications were being prescribed less often, rates of prescription medication abuse decreased significantly and as a whole. Over the course of the year, mortality rates involving the two most frequently abused prescription medications in Florida – oxycodone and hydrocodone – decreased by 13.6 percent and 26.8 percent respectively. Sadly, the rates of synthetic opioid-related death increased significantly during the same year. This is due in large part to the prevalence of fentanyl and fentanyl-laced heroin throughout the state of Florida. In 2017, the age-adjusted rate of Floridians who lost their lives to synthetic opioid overdose increased from 8.3 to 11 percent per 100,000 population.

New Jersey has recently experienced a significant increase in overdose-related deaths that are directly linked to prescription drugs. According to the National Institute on Drug Abuse, there were a reported 2,900 drug-related overdose deaths in the state of New Jersey in 2018 alone. Of these deaths, 90 percent – 2,583 fatalities in total – were directly linked to opioid narcotics, including heroin and prescription painkillers. This exceedingly high number can be largely attributed to the alarming rate at which painkiller prescriptions were written throughout the state of New Jersey during that same year. Providers throughout the state wrote approximately 38.9 opioid medication prescriptions per every 100 New jersey residents in the year 2018.

The Drug Enforcement Administration first began National Prescription Drug Take Back Day in 2010 as a response to the increasing rates of prescription drug addiction and overdose-related death throughout the country. According to the DEA’s website, “The National Prescription Drug Take Back Day addresses a crucial public safety and public health issue. According to the 2018 National Survey on Drug Use and Health, 9.9 million Americans misused controlled prescription drugs. The study shows that a majority of abused prescription drugs were obtained from family and friends, often from the home medicine cabinet. The DEA’s Take Back Day events provide an opportunity for Americans to prevent drug addiction and overdose deaths.” This national event allows individuals to safely dispose of unused medications at designated disposal sites, preventing the potential for future drug abuse. During the last national event, there were over 882,919 pounds of medication collected at over 6,174 collection sites across the country. If you are unable to make it to one of the sites on the specific date you can always send them back on another day or, there are additional steps you can take on your own time to safely dispose of old and unused prescription medications. 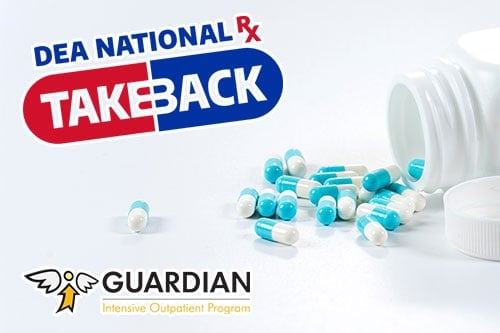 The DEA recommends that even if you cannot participate in this year’s take back day, you still safely dispose of any unused, unwanted or expired medications that you might be storing in your medicine cabinets at home. In order to do this properly there are several specific steps you could take, including:

To find out where you can safely dispose of controlled substances in your area, visit the Diversion Control Division website. Click here and Simply plug in your personal information (zip code, city and state) and a list of applicable locations will be presented to you. Join Guardian IOP in safely disposing of unused prescriptions and potentially preventing a case of drug abuse that could ultimately lead to an untimely and tragic fatality.

Click Here To Find Out The Closest Prescription Drug Take Back Center Near You!