The National Center for Complementary and Integrative Health recently published a report stating that next to multivitamins, energy drinks are the most widely consumed dietary supplement among teenagers and young adults throughout the country. Caffeine levels vary depending on the size and brand of the energy drink, but energy drinks often include between 70 to 300 mg of caffeine – comparatively, an 8 oz cup of coffee contains roughly 100 mg of caffeine. The same study suggests that there are many safety concerns being raised by the consumption of potent energy drinks. For example, the Centers for Disease Control and Prevention report that drinkers between the ages of 15 and 23 who combine alcohol with energy drinks are up to four times more likely to engage in patterns of binge drinking. Between the years 2007 and 2011, the number of emergency room visits related to energy drink consumption more than doubled, and in 2011, 42 percent of all emergency room visits related to energy drinks involved combining heavily caffeinated beverages with drugs and alcohol. There is a growing body of scientific evidence and related research that shows the negative ways in which energy drinks can impact overall health. Despite extensive studies, energy drink consumption is especially high among men and women who are new to addiction recovery.

At Guardian Recovery Network, we believe in the benefits of quitting energy drinks all together. However, we also know that making any major changes within the first year of sobriety can be triggering. While we do not require our clients to give up caffeine altogether, we do encourage them to work towards total abstinence over time. Additionally, seeing as there are so many health-related risks involved in consuming energy drinks on a daily basis, we do encourage our clients to make the switch from over-caffeinated beverages to safe and (somewhat) healthy beverages like black coffee and black tea.

Unlike coffee, which is a staple of 12-step meetings like Alcoholics Anonymous, energy drink consumption has actually been linked to substance abuse and dependency. According to the National Institute on Drug Abuse, new research suggests that individuals who consume energy drinks are actually at a greater risk of developing an alcohol use disorder in the future. A comprehensive study was conducted by scientists from the University of Maryland, College Park. The study followed college students who were roughly 21 years of age, examining their past year use of energy drinks and following them over the course of the next three years in order to determine whether their use of energy drinks had decreased, increased or stayed the same. After five years, they were assessed for past-year substance use. The students who had increased their use of energy drinks showed higher rates of prescription stimulant misuse, cocaine use and alcohol use disorder. This is only one of many scientific research studies that points to the correlation between energy drink consumption and substance use.

If you have come to rely on energy drinks to get you through the day, quitting might be an ideal option – even if you are still in the first year of your recovery. However, it is recommended that men and women who are new to sobriety avoid making any major changes in their first year. Doing so might add unnecessary levels of stress which could potentially contribute to relapse. Take a look at our list of pros and cons, and remember to make the decision that will ultimately benefit you and your sobriety in the long-term. 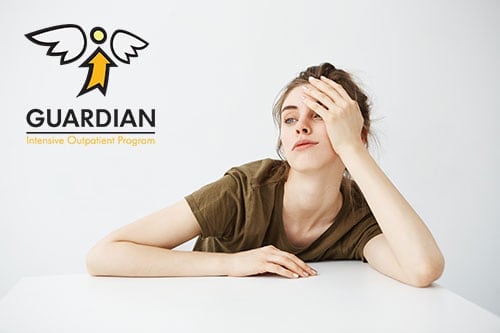 Pros and Cons to Quitting Energy Drinks in Early Recovery

If you are looking to quit drinking energy drinks, we have compiled a list of five helpful tips that will help you effectively quit.

While we encourage our clients to work towards total abstinence, we understand that giving up energy drinks and other forms of caffeine can be difficult to do in early sobriety. For more information on quitting energy drinks or for more information on Guardian IOPs program of drug and alcohol addiction recovery, give us a call today at (888) 693-1894, we are available to help 24/7.